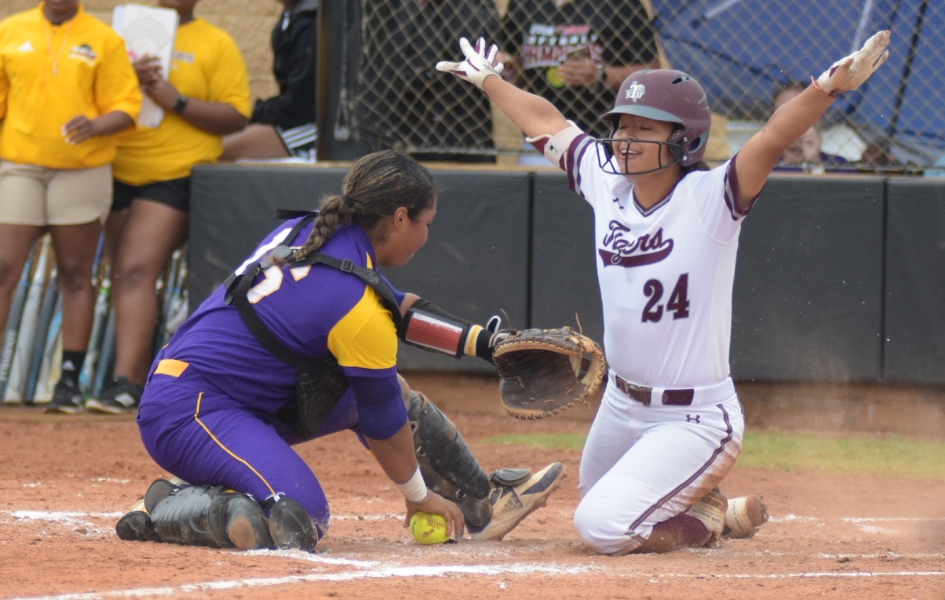 The Lady Tigers jumped out to a 5-0 lead and then withstood a sixth-inning rally by their in-state rivals. Pinch-hitter Paige Jackson knocked a two-RBI single in the third inning that scored Zariah Robins and Marek to stretch TSU’s lead to 3-0.

One inning later, Marek knocked a two-RBI double that scored Lauryn Banks and Terren Vinson. Bilbao opened the scoring in the bottom of the first when she knocked her second triple of the tournament, and then came home on an error.

Starting pitcher Destiny Ricks pitched six complete innings and while allowing just three runs and striking out three batters. Reyes pitched a scoreless seventh inning to earn her second save of the season.

Five different TSU players knocked RBIs for the Lady Tigers as they jumped out to 6-0 lead after three innings of play. Marek hit a solo home run in the bottom of the second inning, while Jackson and Banks each drew bases-loaded walks later in the frame.

Reyes recorded her third complete-game victory of the tournament. She scattered nine hits and took a shutout into the sixth inning.

Alabama State 8, Lady Tigers 4
In the rematch between the two teams, Alabama State went ahead for good with three runs in the top of the fourth inning to take a 5-2 lead, a lead that the Hornets would not relinquish.

Six TSU errors undermined the Lady Tigers’ efforts in the game, as six of Alabama State’s eight runs were unearned. Destiny Ricks took the loss for TSU despite none of the five runs she gave up being earned.