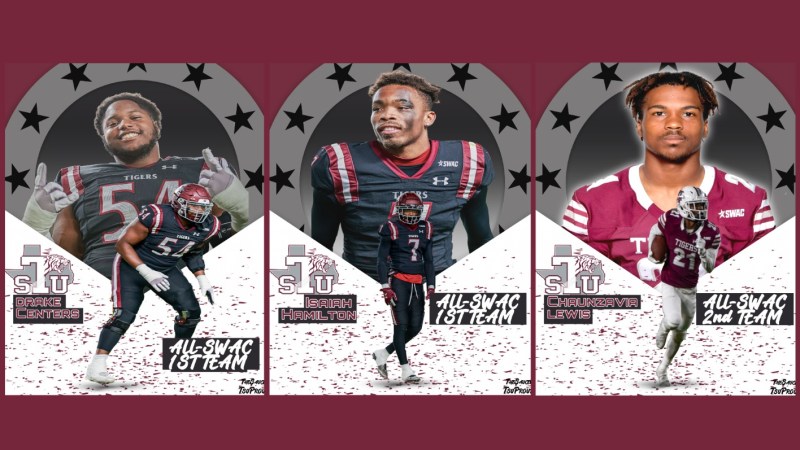 Centers capped off his TSU career with his second consecutive first team honor as this marks the first time since 1966-67 TSU has had a two-time All-SWAC First Team offensive lineman. The Tatum, Texas native graded out at 84 percent overall with eight knockdowns, no sacks allowed and one penalty. TSU finished third in rush offense in the SWAC while finishing fourth with 32 total touchdowns scored.

Hamilton had a dominant sophomore campaign as he led the SWAC with five interceptions and also led the league with two returned for a touchdown. The Houston native also ranked third with 11 pass breakups and 11th in FCS with .5 interceptions per game. Teams only completed 20 percent of its passes against Hamilton as he had the most interceptions in a single season since 2002 at TSU. Hamilton also displayed his versatility this fall as a punt returner.

Lewis had a breakout freshman campaign as one of the most exciting punt and kick returners in the SWAC. The Monroe, La. native ranked sixth in the SWAC with 86.7 all-purpose yards and first in combined kick returns (795 yards). He ranked second in the SWAC and 12th nationally with 26.5 yards per kick return while also leading the SWAC (6th FCS) in punt return touchdowns (1) and punt return yardage (1st FCS) (16.4).

TSU finished the 2022 season with its best record in eight seasons and best conference finfish since 2000.