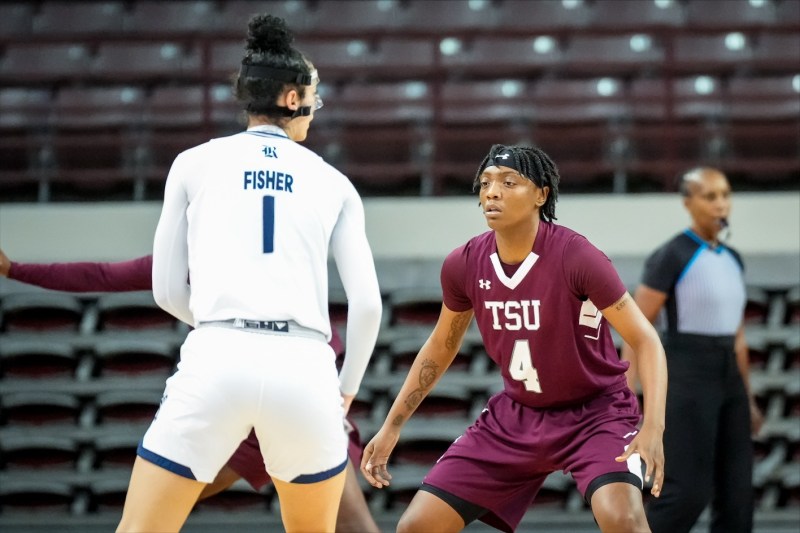 Andriana Avent and Micah Gray combined for 32 of the Texas Southern University women’s basketball team’s 49 total points as the Tigers dropped a 76-49 decision to Rice at the H&PE Arena on Wednesday afternoon.

Avent scored 22 points in 25 minutes of action off the bench by shooting 6-for-18 from the field including 4-for-14 from long range as well as 6-for-8 from the charity stripe.

The 22 points scored by Avent brings her career total as a TSU Tiger to 499 points in 28 games played for a career scoring average of 17.8 points per game.

Gray added 10 points to the cause with three made field goals and four free throws upping her short career total to 86 points in six games for an average of 14.2 points per contest during her freshman campaign with the Tigers.

Unfortunately for the Tiger faithful that showed up to the H&PE Arena on Thanksgiving Eve or those that watched on the Athletic Department’s YouTube channel, Gray and Avent were the only players able to earn double figures in points as Rice remained unbeaten at 5-0.

The Owls utilized their height advantage to own the boards all afternoon outrebounding the Tigers 56-38 and a 50-16 edge in points in the paint.

TSU (0-6) did not score a field goal until Gray made a layup with 1:42 left in the first quarter to make it 17-6 as the first four Tigers points were all conversions from the free throw line.

Gray’s layup was the spark that ignited a 7-0 TSU run to close out the first period to bring the Tigers to within 17-11 with Avent having drained her first three pointer of the game and Tania Hill making a pair of free throws.

A long scoring drought that went from the 7:05 mark after a made three-point shot from Kamryn Bates to a Taniya Lawson made free throw with 1:20 to go before halftime. The drought covered 5:45 of action and would see the Tigers go from being down 21-14 to 35-15.

From then on, it emerged that Rice was just going to be too much to overcome as the Tigers remain winless during a tough non-conference portion of the season.

One positive that the can be highlighted that the Tigers will not lay down as they will keep battling until the final horn and that is evident by TSU winning the fourth quarter 14-13.

Despite being outrebounded as they were, the Tigers did get a strong performance in rebounding from Alisa Knight who hauled in nine.

UP NEXT
The Tigers are about to embark on an arduous road trip covering three games starting Monday, Nov. 28, when TSU faces Ole Miss at 6 p.m. in Oxford, Miss.