TSUSports.com: Season Comes To A Close For Volleyball 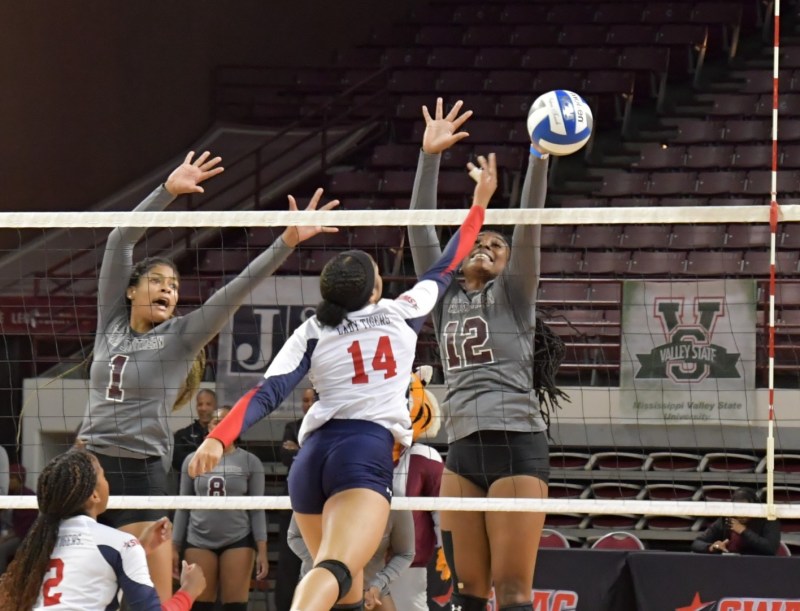 Thalia Cordero-Moreno turned in a strong performance of 13 kills, five digs, two assists and one block assist, but the Texas Southern University volleyball team saw its season come to an end with a 3-1 (25-13, 23-25, 25-15, 25-15) loss to Jackson State University in the 2022 SWAC Volleyball Championship.

Texas Southern (9-19, 9-7 SWAC) stayed with Jackson State (13-16,11-5 SWAC) throughout the early portion of the first set never allowing the Lady Tigers to get out to more than a 3 to 4-point deficit.

An attack error by Jackson State and a Chenise Cook kill for Texas Southern would pull TSU to within 11-9. It was at this point that the wheels fell off as Jackson State would close out the rest of the set on a 14-4 run.

Set two saw both teams tiptoeing around with neither wanting to pull away from the other. Trailing 5-3, TSU got a kill from Cordero-Morero and a kill from Janiya Chapman to bookend a pair of points earned by the Tigers off JSU errors to go on a 4-0 run to take a 7-5 lead. A pair of points by JSU leveled the score at 7-7 before Texas Southern would go on an 8-1 run to take a 15-8 lead.

Texas Southern used five errant plays along with a kill from Danielle Lilley and two from Cook during the run.

Jackson State answered with an 8-1 run of its own to equal the score at 16-16 as both teams started to play tag with the lead, which JSU would eventually hold at 22-21. Amber Johnson’s kill leveled the score at 22-22 before and an attack error by TSU gave Texas Southern a 23-22 lead. A pair of Cordero-Moreno kills sandwiched around a Jackson State kill would give Texas Southern the 25-23 set victory.

The third and fourth sets were completely opposite of the second as TSU combined to go 16-15-64 for .00156 hitting percentage as the Tigers would drop both sets by 25-15 scores to end their season.

Kaitlyn Scroggins led Texas Southern with 19 digs while Dallas Balanay-Flores and Alaiyah Fields would lead with way in the two-setter rotation dishing out 14 and 12 assists, respectively.

The loss ends the season for Texas Southern and the first for head coach Alexis Austin.